On September 24, 2016, two wonderful, loving souls stood up in front of a crowd of their family and friends and vowed to spend the rest of their lives together.

Chris and I were fortunate enough to spend this day with our friends Tiffany and Shane. The two had a beautiful, rustic wedding. Tiffany and Shane said their vows on the field of Tiffany’s family farm. To make the day even more perfect, a baby lamb was running around and eventually settle behind the two saying ‘I Do’. 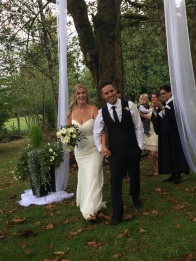 Tiff and Shane strayed away from traditionalism, having no wedding party stand up with them, and having a very close friend marry them, having only someone else there to cover the legalities.

The ceremony was touching, personal, emotional and exactly the way I had pictured it would be.

Since the wedding was on the family farm, I didn’t want to over-dress, but I also didn’t want to show up in jeans and a t-shirt. I found a beautiful dress from H&M in Las Vegas. It was baby blue lace with a nude underlay. I paired it with beige sandals to make it a bit more casual.

After the quick ceremony, there were drinks and food set out for an ‘appie hour’ before dinner. That lasted about an hour, where everyone mingled, drank and congratulated the newlyweds.

Soon it was time for dinner. After months and months of preparation, everyone was allowed to see how transformed the lamb barn had become. It was absolutely gorgeous and you could see all the little details that were put into it.

We sat at our table and made new friends before entering an auction for dinner. Money was being raised for the food bank, a cause close to the newlyweds and the caterers who happened to be family friends. Our table went up third, raising nearly $200.

Dinner was incredible. Everything, down to the salad dressings, were homemade. The chicken was made from the chickens that are raised on the farm, as well as the vegetables that were grown in the garden.  Every single thing about this wedding had a personal touch, which just made everything so much more special. 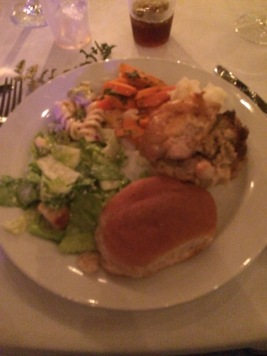 After dinner, the dance floor opened up after the first dance between the newlyweds, and family. One thing Tiffany and Shane were extremely worried about was everyone having a good time. One thing I am absolutely sure of is that everyone in attendance had one of the best nights of their lives.

Congratulations Tiffany and Shane, may you two have a long life together full of happiness and love. Thank you for sharing your day with Me and Chris, it was extremely special.