Victoria is such a fun place to go and explore. There are many different shops, restaurants and sights to see. After going to the gulf islands to visit my grandparents, Chris and I decided to take a day trip to Victoria.

We caught the early afternoon ferry, which made one stop, before going on to Swartz Bay on Vancouver Island. It was such a gorgeous day so we sat on the outer deck of the ferry. That night, we realized that it was a mistake to do so. It was so windy on the ferry, we didn’t realize we were burning, and because we didn’t think ahead, we didn’t put on any sunscreen for the day.

Once we arrived at Swartz Bay, we ran to the bus. We didn’t have much time to wait before a direct, double-decker bus pulled in. The bus took just under an hour and dropped us off right in Downtown Victoria.

Chris and I had been to Victoria together before, but hadn’t really toured the streets and shops. We decided that we would stroll along and see what caught our fancy. Soon enough, we came to the beginning of Chinatown. The gate to Chinatown towered above us. It was so beautiful and ornate we had to check this area out. 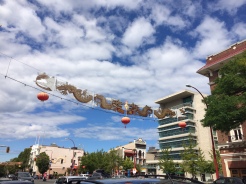 Chinatown in Victoria is the oldest Chinatown in Canada, and the second oldest in North America. Walking through the streets was like walking into a China itself. We found outdoor markets, restaurants and shops packed so full you could barely walk around. The one thing that was really memorable was Fan Tan Alley.

Fan Tan Alley is the most narrow alley way I have ever seen. It is one of the narrowest streets in Canada. It houses little shops that were so hidden, you would have to know about them to find them. It was originally used to house a gambling district with many opium dens.

We were wowed with Chinatown and highly recommend it for anyone who goes to Victoria. We spent a few hours here, but if you don’t have much time, it is great to just walk through as well.