This past weekend Chris and I went over to my family cabin on Mayne Island. We left Friday night and came back home Sunday. Due to the fact we were so close to Vancouver Island, we decided to take a day trip to meet up with my grandparents.

The ferry took two hours, with two stops along the way. Once we arrived at Swartz Bay on Vancouver Island, we made our way to the bus stop to go to downtown Victoria where we were meeting our grandparents. It was absolutely pouring out. II was dressed in my poncho from H&M, a light green top with leather detailing from Nordstrom Rack, black skinny jeans from Old Navy, and my black boots from Payless. Even though I had my umbrella, I was cold and soaking. 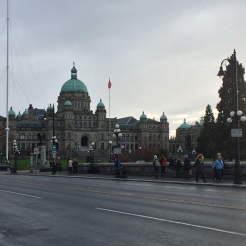 The bus took just over an hour and dropped us off right by the Fairmont Empress, located in the heart of downtown. Waiting near the old double-decker red tour buses, my grandparents met us in their truck. We jumped in and they announced we were going to Sidney, which is where we had just come from.

In the truck, the drive was short. We arrived in Sidney and walked straight to the water. The view was beautiful. We walked around the water for a while before ducking in to a pub, the Beacon Landing Restaurant and Lounge,  for drinks and wings. It was an incredible spot. From where we were sat, you could look right out to the ocean. 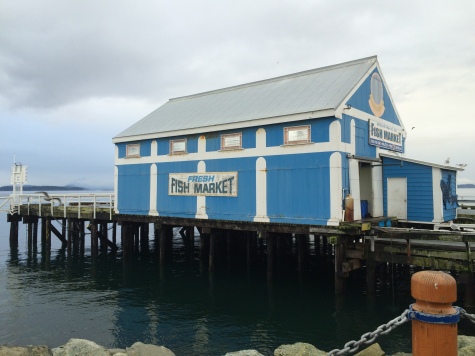 After the quick stop, we made our way down the little boutique lined street to where we would be having dinner. The little town felt so quaint and reminded me vaguely of Seaside in Oregon. We ended up at the Sidney Harbour Chinese Restaurant which was a Chinese buffet. The food was outstanding.

We ate our dinner, going up multiple times to refill our plates. Soon enough it was time for Chris and I to head back to the ferry, which would take us back to Mayne Island.

It was a wonderful day trip. I think that, while this place was lovely in the fall, it is a spot that needs to be explored in the summer.