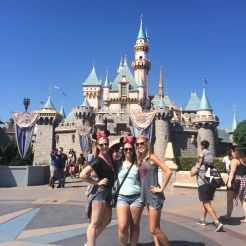 Yesterday was my birthday. I am now legal in the States. Woohoo!

If anyone knows me, they know how much I am obsessed with Disney and all things related. So, it was fitting that I spent my 21st birthday in Disneyland.

When we arrived at Melissa’s house, she asked us to come in and she gave me a birthday gift too! I really have the greatest friends. We then set off to Disneyland.

We arrived at Disneyland around 1130am. Decked out in my Minnie Mouse ears, I couldn’t have been more excited. I was also wearing my denim American Eagle shorts, blue lace top and my blue Primark runners.

I have never seen Disneyland decorated before. Since it is close to Halloween, and yesterday was the first day of Fall, there were Disney themed pumpkins everywhere. The first thing we did was go to the Haunted Mansion. At this time of year they do the ride up like the movie, ‘The Nightmare Before Christmas’. I was amazed at how well done the decorations were. They ride looked completely different than it usually does.

Since it was a Monday and kids were back to school, it wasn’t busy. We were able to do so many rides in so little time, it made the day well worth it.

After we went on our favourite rides in Disneyland, we decided to go for lunch. We chose to eat at the House of Blues for happy hour. I ordered my first legal drink! It was exciting. The three of us shared warm spinach and artichoke dip. After our appetizer we all ordered salads. Shelby and Melissa ordered a buffalo chicken salad and I ordered a ceaser salad. We all quickly ate and then ordered birthday shots! When we were done with lunch we decided to head over to California Adventure Park.

Don’t get me wrong, I love both parks, but yesterday I was a bit disappointed. We made our way to the Tower of Terror. There was no line up so we got straight on. After that, we went on the Cars ride. While we got on those rides quite quickly, those were the only two rides we got on. After the Cars ride we tried to get on the big roller coaster, however, it was shut down. Then we noticed nearly all the rides were closed down. We gave up after that and went back to Disneyland.

We only went on one more ride before it started to get busy and our feet started to hurt. Around 730pm we decided to call it a night and go home. All in all I had a fantastic birthday!

One thought on “Disneyland, California”