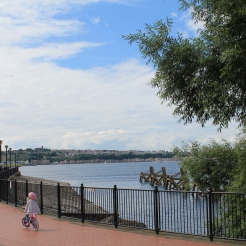 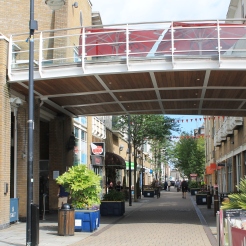 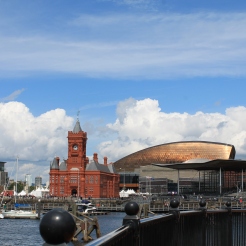 I have been to many places in the U.K., including Scotland and Northern Ireland. However, one place I had yet to visit was Wales. After last weekend that was changed.

My boyfriend and I decided to visit Cardiff, Wales because of how well known the city is. This city is the capital of Wales, and also its largest city. Without even being, we knew we’d made the right choice to visit.

On Friday I went to meet my boyfriend after work to catch our three and a half hour train. After being in the downpour outside, I was looking forward to relaxing on the train.

We arrived in Cardiff just after 10pm. We made the short walk to the hotel and decided to get an early night for the next day, which was sure to be busy.

We got up early Saturday morning and made our way to Cardiff Bay. Taking many photos along the way, we decided to make a quick stop into Costa Coffee for a lovely, quick breakfast. By the time we were finished it was just after 11am, so we made our way to the Doctor Who Experience, which we already had tickets for. This was fantastic and left us in a great mood for the rest of the day

We then walked around the bay looking at the little shops, and stopped for a quick lunch.  After we stopped into the Cardiff visitor and millennium center where there were hourly shows. We managed to watch one which was an interpretive dance piece. We left impressed but also exhausted from hours of walking. We decided to head back to our hotel room at the Mercure to have a quick nap before going out for dinner and a play. 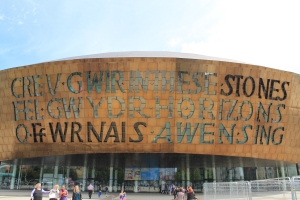 Soon we got our energy back and got ready for our night out. I chose a simple light blue, ruffled, animal print dress from Forever21  and black heels from New Look. I added my Tiffany heart necklace to keep with the minimalist theme. This way I wasn’t too over dressed to walk around the city, but not under dressed from a Shakespeare play at a Castle. 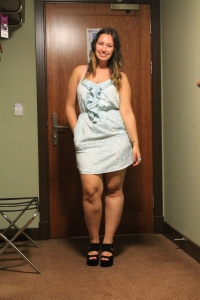 When we researching Cardiff, I came across a outdoor play that is put on in the Cardiff Castle one weekend a year. We were lucky enough to be in Cardiff the weekend it was on, so we bought tickets without thinking twice.

I hadn’t had sushi since I’ve been away (it’s my favourite meal). It was killing me. As we walked around the city, we decided to try and find a sushi restaurant. Since I personally think no where compares to Vancouver sushi, I was skeptical that we would find somewhere good. I was proven wrong. We stumbled across a sushi place that was so delicious I didn’t want to stop eating. 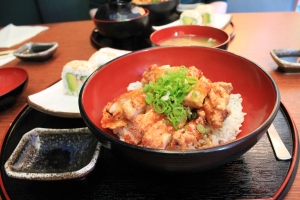 After dinner we made our way to the castle where we sat in the grass and watched a performance, by an all male cast, of Shakespeare’s Romeo and Juliet. The play was put on so well, I would go back the same weekend just to see them again. 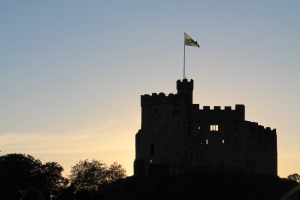 The next day we had our train home so when the play ended we decided to head back to the hotel and call it a night.

Our train wasn’t until the evening, so on Sunday we decided to explore the city some more. We went around the shops and made our way to the National Museum Cardiff. We spent a few hours here looking at art, such as Monet’s Water Lilies, and learned about the natural history of Cardiff. 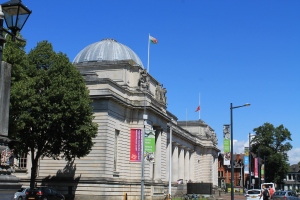 By the time we were done we had little time left in the city. To spend the rest of our day here, we went to the park surrounding the National Museum Cardiff and sprawled out in the sun. We stayed here until we made the walk to the train station, ready to go home. 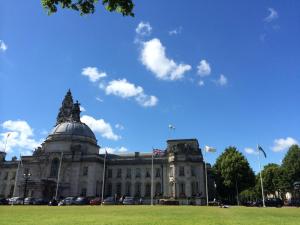 If you are thinking of visiting Wales, I suggest choosing Cardiff as the city to see. There is the perfect balance between nightlife, shopping and history. Cardiff holds everything you need for a great weekend away.

One thought on “Cardiff, Wales”